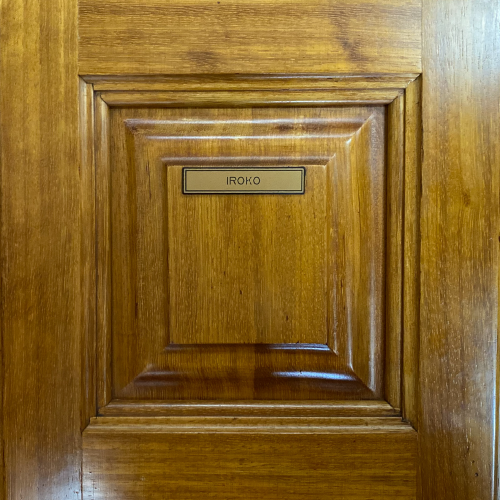 Please select your thickness below to get the correct pricing

Across the continent of Africa from west to east.

Other names
The Nigerian name iroko has been universally adopted as the trade name on the international market. In East Africa it is known as mvule.

It is a large tree with a long straight, practically unbuttressed stem which may be clear of branches to a height of 20m.

Iroko is somewhat variable in colour, from pale-yellow to medium-brown when fresh but soon darkening to a uniform brown colour. On exposure to the weather, as ships’ decking, garden furniture etc, it bleaches like teak. The timber is somewhat coarse-textured, with an interlocked and sometimes rather irregular grain, and of medium density, seasoned, which is about the same as teak. Iroko has a superficial resemblance to teak but is readily distinguished by its coarser texture, and lacks the characteristic greasy feel and leather-like smell of teak.

Strength and bending properties
Iroko is harder than teak but slightly inferior in other strength properties. For steam bending it is classed as only moderate.

Durability and preservative treatment
In the green condition the timber is liable to damage from pinhole borer and longhorn beetles, but once dry the heartwood has a high measure of resistance to both insect and fungal attack. It cannot be effectively treated with preservatives.

Working qualities
When free of stone, iroko presents little difficulty in working with hand or machine tools. Dulling of cutting edges is much less than with teak, unless stone is present, when it can become severe. Iroko can be nailed and screwed fairly well and takes stain but its coarse, open texture requires filling before polishing. It is not usually painted but can be if desired, using a thin primer.

In the countries of origin iroko is regarded as the local equivalent of teak, being outstanding in its lasting qualities and stability, and not unduly hard or heavy, with good all-round strength properties and a pleasing appearance. In Europe and North America its use has been developed largely as an alternative to teak; it has the advantage of being considerably less expensive. It is used, for example, in ship and boat building, for high-class joinery in public buildings, for laboratory benches, draining-boards, garden furniture and flooring. For exacting work it is advisable to eliminate pieces with irregular grain.